On the 5th of May, 2022, the European University Association (EUA) hosted the first of three webinars that have civic engagement and universities as their subject. This first webinar took a closer look at universities and democracies, new tools developed for measuring community engagement, and some real-world examples provided by a university. The webinar’s host was Anna-Lena Claeys-Kulik, and the three guest speakers were Dr Jana Bacevic, Ninoslav Šćukanec Schmidt, and Dr Pastora Martínez Samper. 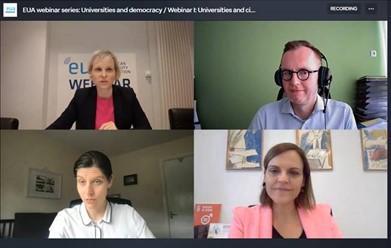 Dr Jana Bacevix started the round of presentations by shedding some light on the relationship between universities and democracies. She emphasized that democratic universities are not necessarily founded in democratic societies. Some of the oldest universities in the world were founded during the reign of empires, but enjoyed relative freedom from political power. That the spread of liberal democracy and the expansion of higher education coincide so much is a rather logical deduction to make. To attend a university, literacy, numerical and critical thinking skills are required, and pave the way for people to learn how to build consensus. However, only a strong and healthy democracy can sustain a strong and healthy university. Problems within the democracy become problems of the university. 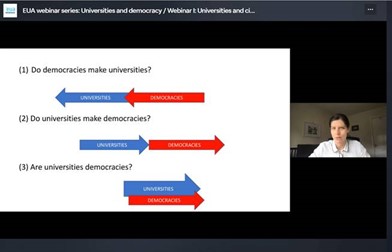 The second presentation of the day was given by Ninoslav Šćukanec Schmidt, Executive director for the Institute for the Development of Education in Croatia. He addressed actions that could be taken on a European level to foster higher education, and the relevance of community engagement. He introduced a toolbox which would make it possible for universities to recognize community engagement activities, and to measure their quality. The toolbox -named Towards a European Framework for Community Engagement in Higher Learning, abbreviated as TEFCE- uses an alternative approach for measuring data in a qualitative way -without the use of metrics-. It is an institutional self-reflection framework which will allow universities to better understand the dimensions of community engagement, using 4 tools over 5 different stages of analysis. Due to the nature of community engaged activities, it is difficult to measure them properly. This tool would raise the visibility of these activities, and empower students and researchers to be better in community engaged activities. 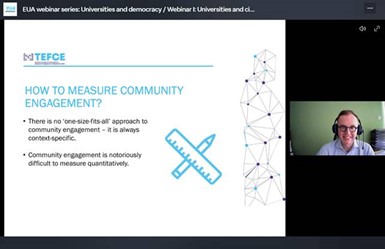 The last presentation of the session, but certainly not least, was given by Dr Pastora Martínez Samper, bringing with her several practical examples of community engaged activities from the Open University of Catalunya (UOC), a fully digital university. She first made the point that university communities are already engaged communities, and are not just bound to the university campus. These communities create activities outside of the campus, and consist not just of students, but academics as well. The first example of community engagement of the UOC that was shared with us was about a group of students who issued a call to action regarding the refugees from the Syrian war. The globalization cooperation team of the UOC and the students decided to work together, and set up a pilot in Greece, and later also in Spain and the Sahara. The project allowed for those refugees to partake in online courses, giving them access to education.

The second example was decidim, which is a digital program for citizen participation. It was developed by a research group within UOC for the Barcelona city council, and it is now being used all over the world, by cities, regions, and universities to include citizens into various projects. This tool shows us that universities have the tools needed, and the responsibility, to make such programs and make citizen participation easier and more accessible. 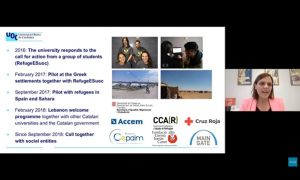 This was but the first of three webinars tackling the questions surrounding civic engagement and universities, and if the next two were as interesting and intriguing as this one, I will be very much looking forward to them. You can (re)watch the webinar for yourselves! Just follow this link to the EUA’s youtube channel: https://youtu.be/xCtodWNbo70