Hello! I am Matthew Dougherty, and I am currently completing my master’s degree in maths at Queen’s University Belfast. I have had the opportunity to work with Fermanagh Community Transport for my master’s project, which involves investigating their passenger data using a variety of statistical techniques. The main aims of the project were to understand the impact of the COVID-19 pandemic on the charity, to analyse the most important factors of rural inaccessibility in Fermanagh and to assess which areas of Fermanagh are affected by rural inaccessibility the most.

I used three different methods to analyse these aims. The effect of the COVID-19 pandemic is measured by comparing the Fermanagh Community Transport numbers to previous years using confidence intervals. Should the numbers over the pandemic differ significantly compared with previous years, this provides mathematical evidence that some external factor is at play. This analysis can highlight areas where the pandemic has changed the transport activity of its members, and allow Fermanagh Community Transport to adjust its services to better meet the needs of its members. This analysis can also identify groups that have been significantly affected by the pandemic, as such groups may require more resources to help them out.

Analysis of the most important factors in predicting rural inaccessibility can provide us with the knowledge of how best to deal with the issue of rural inaccessibility. This process involves using machine learning algorithm called linear models, which can assess whether a factor, such as a high car ownership, an older population, the health of the population or public transport provision, can significantly predict how inaccessible each region is. Without a mathematical technique such as a linear model, finding connections between accessibility and these factors would be very difficult and backing it up with evidence would be impossible.

The regions within Fermanagh that are the most inaccessible were also identified using linear models. These regions score poorly on a series of linear models investigating 6 key questions related to inaccessibility:

The discoveries I have made by doing this project have been fascinating. Factors such as a high car ownership in areas significantly correlate to areas with the most inaccessibility. This gives us evidence that the car is not just a luxury for people in these areas, but an essential expense that unfortunately not everyone in that area can afford. Not only this, but as these areas also containing a higher percentage of older people, the rate of driving cessation is also higher. This means that people without access to private transport for financial, health or other reasons are among the most left out in society.

Services which can provide these people with transportation help are therefore invaluable as the public transport network is not extensive or frequent enough at this time to help people meet their social, mental and physical needs that proper transportation access provides.

The most affected areas are shown in the map.  You can see that Belcoo and Garrison, Belleek and Boa and Kesh Ederney and Lack 1 are the most affected regions. In general, deprivation is most felt in the most rural areas further away from Enniskillen, Lisnaskea and Irvinestown.

This project has been an eye-opening experience, as the issue of rural inaccessibility has not been talked about enough in today’s society. The enthusiasm of the entire Fermanagh Community Transport team is infectious and it is incredibly clear that they have a passion for helping the people of Fermanagh out. 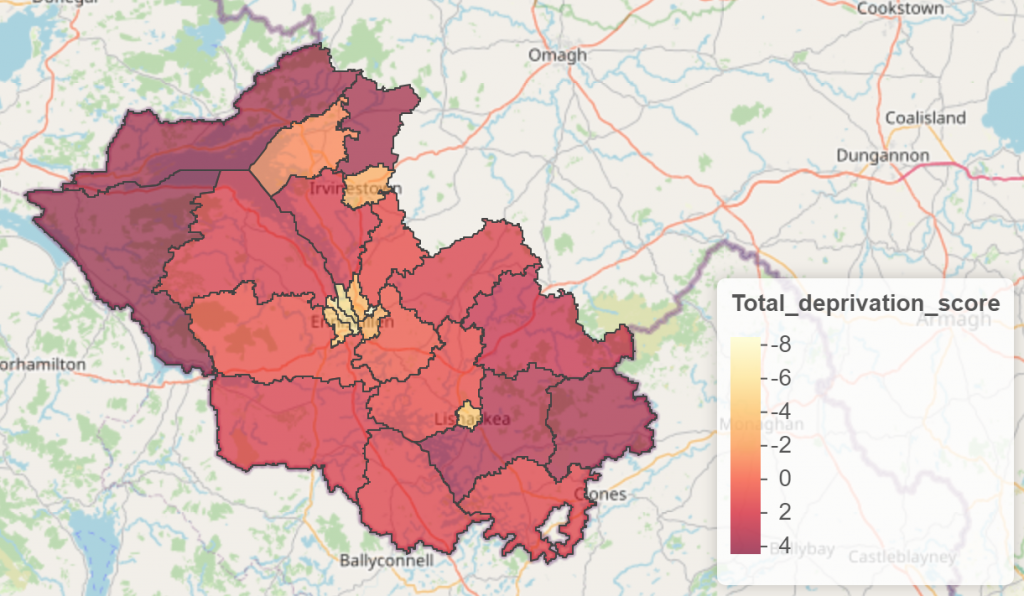 Map: Most deprived areas in Fermanagh